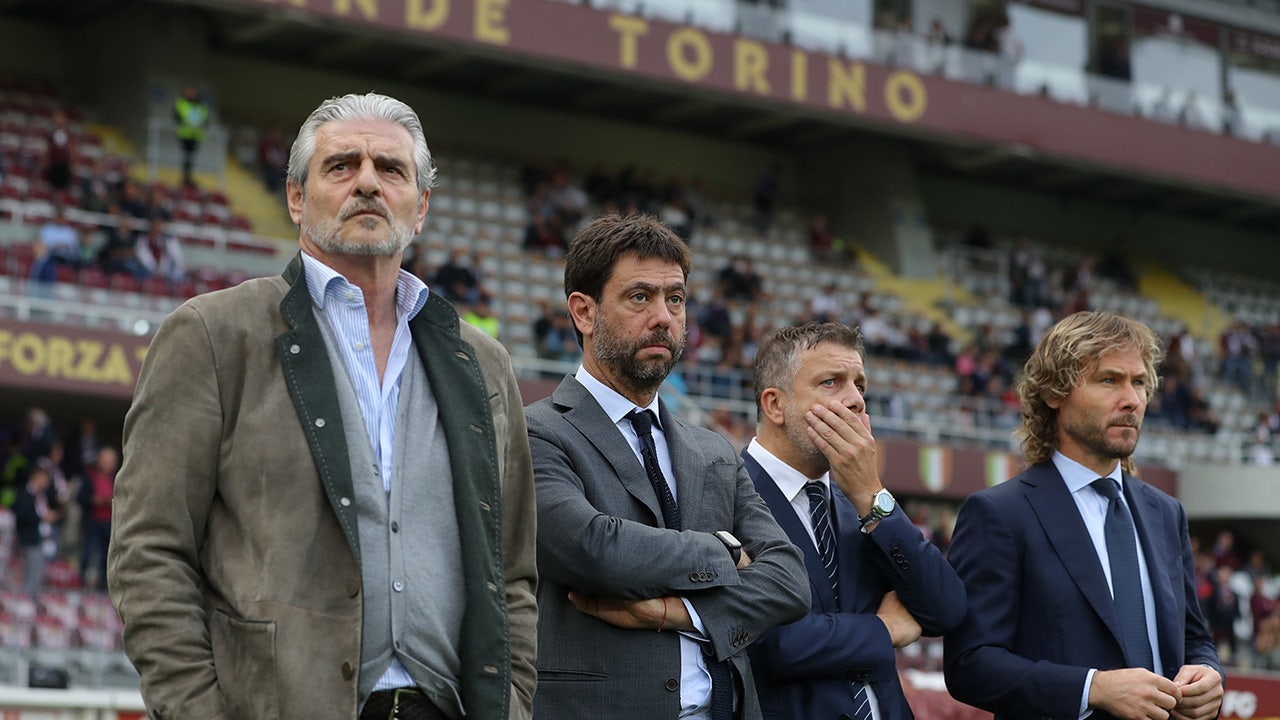 Juventus FC, Italy’s most successful soccer club, was thrown into further turmoil on Monday after the resignation of its entire board of directors, including president Andrea Agnelli.

Juventus have won Serie A a record 36 times.

The move comes as prosecutors and the Italian market regulator Consob investigate the club for alleged financial irregularities between 2018 and 2020.

Prosecutors have been investigating whether Juventus collected illegal transfer and loan fees from players. They are also exploring whether investors were misled into issuing invoices for non-existent transactions to prove income that, in turn, could be considered false accounting.

(L-R) Juventus director Maurizio Arrivabene, chief executive Andrea Agnelli, director of football Federico Cherubini and vice president Pavel Nedved look on from the touchline before the start of a Serie A match between Torino FC and Juventus at the Stadio Olimpico di Torino on October 15, 2019. 2022, in Turin, Italy.
(Jonathan Moscrop/Getty Images)

While sports authorities initially dropped their investigation into Juventus’ alleged false accounting, the Italian soccer federation’s prosecutor requested documentation from the Turin authorities leading the investigation, meaning Juventus could risk being penalized with points in Serie A.

The team is 10 points behind Napoli in the league, and they exited the Champions League in humiliating fashion, collecting just three points from six games.

A shadow now hangs over the Agnelli era, which has proven to be one of the club’s most successful.

When Agnelli replaced Giovanni Cobolli Gigli in 2010, the team had finished in seventh place in Serie A the previous season. In the intervening years, Juventus have won the title nine consecutive times, moved into their new stadium in Turin, and reached the Champions League final twice.

Juventus’ recent troubles are reminiscent of the disastrous Calciopoli arbitration scandal, which in 2006 saw the Italian giant stripped of two Serie A titles and demoted to Serie B.

A statement from Juventus explained that «given the centrality and relevance of pending legal and technical-accounting issues, [the members of the board] considered it in the best interest of the Company that Juventus set up a new Board of Directors to address these matters.»

The statement also denies any wrongdoing.

The calls to action against Juventus have been swift from some quarters. La Liga, which has strict financial fair play rules, issued a statement demanding that UEFA respond to Juventus’ financial dealings.

«As part of its campaign to promote financially sustainable football in Europe, LaLiga continues with these complaints against Juventus and demands that the relevant authorities apply immediate sporting sanctions to the club,» the statement said.

WORLD CUP 2022: SOUTH KOREA COACH PAULO BENTO YELLS AT THE REF FOR THE END OF THE MATCH

La Liga president Javier Tebas has frequently criticized the Italian club, along with Barcelona and Real Madrid, for their continued involvement in developing a European Super League, which seeks to supplant the Champions League.

Juventus fans hold a banner with the club’s logo during a Serie A match against FC Internazionale at Allianz Stadium on November 6, 2022 in Turin, Italy.
(Jonathan Moscrop/Getty Images)

Juventus’ parent company Exor, which also owns stakes in Ferrari and The Economist Group, announced that accountant Gianluca Ferrero would take over as chairman.

Maurizio Scanavino, chief executive of the private media group GEDI, which is also owned by Exor, has been appointed CEO, while Juventus CEO Maurizio Arrivabene will retain his position on a temporary basis.

According to the Turin newspaper La Stampa, the executive director of Exor, John Elkann, explained that «the resignation of the Juventus board of directors represents an act of responsibility, putting the interests of the Company first.» Elkann is the grandson and heir-designate of Gianni Agnelli, the family patriarch.

He also supported current Juventus manager Massimiliano Allegri, who was instrumental in Juventus’ success during his first spell with the club.

The shakeup at Juventus comes shortly before Elkann’s annual presentation to Exor investors on Wednesday.

The company’s other flagship sports holding company, the Ferrari Formula One team, announced its own reorganization on Tuesday, parting ways with team principal Mattia Binotto.

Associated Press and Reuters contributed to this report.

Jeff Zymeri is a Digital Production Assistant for Fox News. Find him on Twitter @jeffzymeri