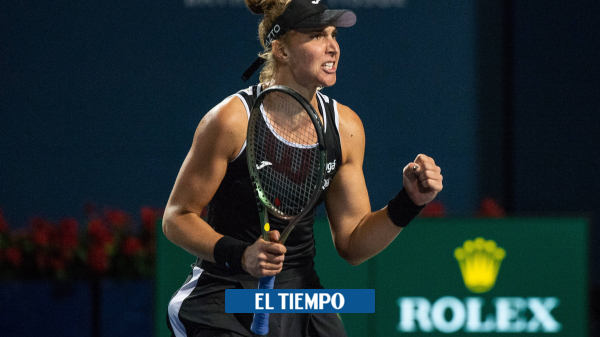 The Brazilian tennis player, who was highlighted on December 12 by the Women’s Tennis Association (WTA, for its acronym in English) as the player with the highest growth throughout the season, had the best sports year of her life.

Her first two elite singles titles (Nottingham 250 and Birmingham 250), two doubles trophies (Sydney 500 and Nottingham 250), six finals played, a thirteen-match unbeaten streak, her debut at the WTA Finals and the seventy positions climbed in the ranking to reach the top 15 in the world account for the altitude of his flight.

However, in his case, as if it were a phoenix, the ones that speak best are their ashes.

Bia, as she has been nicknamed since she was little, was destined to be an athlete. The daughter of a tennis teacher and a former basketball player, she grew up practicing soccer, judo and Olympic gymnastics. Then, she celebrates the story, she opted for tennis.

Due to her height (today she measures 1.85) she was always considered one of the players with the greatest projection in South America, but repeated injuries cut short several takeoff attempts. One dislocated shoulder, three herniated discs, one fractured humerus, and three broken vertebrae they interrupted his career for several months from 2013 to 2017 and prevented his consolidation.

By 2019, after repeating himself with the insistence that «everything happens for a reason», the physical ordeal seemed to be over. But on July 23 of that year, after reaching a climax point by defeating the Spanish Garbiñe Muguruza, one of the great cheerleaders of the previous decade, in the first round of Wimbledon, the biggest blow of her career came: the International Tennis Federation suspended it after finding a substance prohibited by the World Anti-Doping Agency in a control made in competition.

I went from heaven to hell in 10 days. My immediate reaction was to go cry in the bathroom, I saw the message and couldn’t read the notification letter anymore, I shuddered and screamed in despair. I never finished reading that letter.» Bia acknowledged, in a personal testimony published on May 22, 2020, the day he finished serving the sanction imposed.

By the time of this writing, due to inactivity, Haddad Maia had already fallen in free fall in the ranking, but on August 30 the point of no return came, because fell to position 1,342, the last position. And although the situation indicated that he could not get worse, the outbreak of covid-19 prevented his return to the courts due to the cancellation of most of the season. In fact, after managing to play a few minor tournaments in September of the first year of the pandemic, they detected a tumor on one of the fingers of his left hand, they removed the skin from his hip and made a graft. In the end, his return, without pause, came in February 2021. But the time to fly, as the world recognizes, came this year.

Today Bia, the first Brazilian to reach the top of the ranking during the almost fifty years of the WTA’s existence, is authoritatively The best Latin American tennis player. In addition, it is the first in the top 15 since the Argentine Paola Suárez, who was number 9 in the world in 2004.

With the maturity that having hit bottom to reach the top gave her, Beatriz Haddad Maia spoke with EL TIEMPO.

In the conversation, traveling through the past, the present and the future, a single sensation: his flight has just begun.

(It may interest you: Rafael Nadal confesses to EL TIEMPO: «I am not afraid of the future outside of tennis»).

Beatriz Haddad Maia is today the best tennis player in Brazil and, by far, the best Latin American…

That’s right… I’m very happy. I have worked very hard to be able to do the things that I have been doing, but my goal is not to be better than anyone, neither the best in Brazil nor the best in Latin America. My goal is to be the best Bia, in the best version and condition that I can, that’s what moves me, that’s what moves my team; each one seeks the best of himself each day, here our struggle is more internal than external. However, it is true that I feel an enormous privilege to be able to represent Latin America and women as I am doing, and I hope to continue like this.

«From heaven to hell in ten days», you wrote about that doping sanction that changed everything in 2019. How do you see that time today?

The sanction left me many lessons. I learned a lot in the time that I was abroad. I believe that 2019 and 2020 taught me a lot, they taught me to live and face life in a different way, to know how a person who does not live from tennis lives, which is clearly an elite sport. In all those weeks I was able to learn more about people’s day-to-day lives, the reality of my country, my family, my friends… that was very satisfying.

Those were the most difficult days of his career…

Yes… back then I couldn’t even watch tennis matches because it hurt a lot to do so. I stopped my activity on social networks, I came to think that it had been the end, there were times when I really felt very bad, but I didn’t end up getting depressed either. It was always clear to me that I would start from scratch and that it would be possible to resume the fight for my dream.

How did you stay calm in such a difficult time?

It was not easy, the truth is that I spent time with a lot of patience, with a lot of resilience, always trying to be better every day and taking advantage of the hardest moment. I believe that all the obstacles that I have had to go through in my career, not only the suspension, but all the injuries that I have had, because I have had to move away from tennis six times and resume, have made me a person stronger to face the circuit today.

(You can read: The tennis player who overcame anorexia to be among the best in the world).

This year you won your first two titles, rose seventy places in the ranking and came to beat number one… what has changed in you?

I can safely say that the results are the product of a lot of work, resilience and patience. It all has to do with the work on my mentality that we have been doing with my team. I have worked a lot on my conscience to enter the game, try to be the same in training as in tournaments, to face reality as it is, to face my fears with courage and I believe that all this has been key to reaping the fruits of effort

What is it like to be the fastest growing player in 2022, as the WTA decorated her a few days ago?

I feel very happy with the recognition of the people and the organization, but one is aware that the news comes and goes. For me it is something that motivates me, because the better my ranking on the circuit, the greater my responsibility with people, with children, with my image and my work, everything has to improve together. The truth is that I see this as an opportunity to continue growing and not as pressure.

Tennis players usually say that they don’t play for the ranking, but after all, that stick is always there… how far do you plan to go?

The ranking is a consequence of what we do on a day-to-day basis. At the beginning of the year I was in 85th place and I had in mind to finish in the top fifty, the middle of the year came and I was in 25th place, now I finish in 15th place… so it is difficult to say how far I will go, but I think that I have the potential to stay in the top 20 in the world. I think it’s a matter of working very hard, improving the details of my game and my physique, working on my mind and continuing to seed every day to be as high as possible.

Of the Latin Americans, she is followed by the Colombian Camila Osorio, who is number 80. How do you see her projection?

Camila is a very young player who entered the top of tennis very young. I have no doubt that she will gain even more experience because she is a girl who is very hard-working. We must remember that we are players on the pitches, but off them we also go through difficult times. I know that she went through a difficult personal time this year, but I know that she is a fighter and whoever works the way she does will collect many good things in the future. She is a very competitive player and I think the biggest quality of her is that she is very focused when playing.

Tennis reminds me of Sundays with my grandparents, with my cousins ​​at the club, when we would return from school and play for fun. It has always been a love and a passion, which comes a lot from the family and that is why it is so special. I have had the privilege that tennis became my profession. It is living incredible from what you love, today it is a way that allows me to work and improve myself, find my best version on and off the courts.

Tennis has taught me humility, respect for others, the ability to face moments of pressure, difficult situations, defeats and everything that life has to offer. That’s why tennis represents so much, I love it so much and it matters so much to me.

Are we in a recession? is one coming? This is what the economists say.