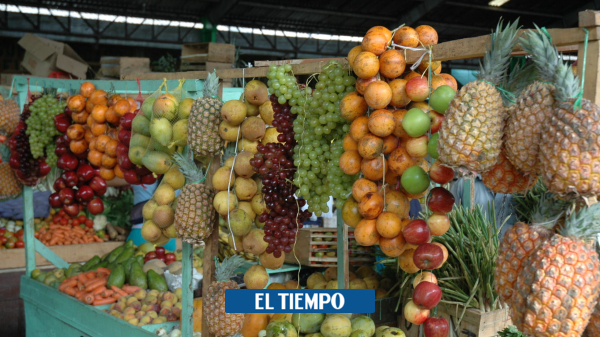 In terms of agricultural exports, Colombia is more than coffee, flowers and bananas. In the national territory there is a high potential to grow exotic fruits that are highly desired by multiple countries around the world; however, there are several constraints that are preventing these opportunities from being taken advantage of.

An oversold above the others: the little exportable supplysince these fruits must meet special standards so that they can leave the country, different from those required when the destination is the national market.

(Also read: Colombian mango can now be sold in the United States)

It is inconceivable that there is opportunity and attraction for Colombian products and there is no offer.

For example, the United Arab Emirates is demanding gulupa, pitahaya and tree tomato, while China is requiring high volumes of Tahiti lemon, but Colombia has no production to respond. The same is true of the demand from other countries such as Bahrain, Saudi Arabia, Germany and France.

The Minister of Agriculture, Cecilia López, is aware of this. «It is inconceivable that there is opportunity and attraction for colombian products like the Tahiti lemon, the exotic fruits of the Amazon or the Hass avocado, and there is no supply,” he said.

Meanwhile, the president of the Colombian Farmers Society (SAC), Jorge Bedoya, stressed that the main challenge for these exports is in the admissibility protocols with destination countries, which are related to the certifications that are required and that producers must achieve. It also influences whether the markets are profitable for Colombian products.

While Chagai Stern, executive director of Managro, believes that The problems are also in the logistics, since, in general, fruit crops are distant from seaports. Additionally, other influencing factors are the lack of education and the improvement of genetics. «In Colombia, they do not invest in education or in teaching the producer how to improve genetics, and nearby countries produce better quantity and quality,» he commented.

There are several paths that can be taken to improve this situation. For example, to increase this exportable supply, the minister raises the need to identify the flaws that exist in the promotion of products and to increase their productivity, but also the limitations that arise from the Colombian Agricultural Institute (ICA) due to farm certifications.

This is the case of Nariño, a department where there is great potential for the production of Tahiti lemons, but the certifications are not being issued quickly enough, according to minister Cecilia López.

Joint work between the ICA, Agrosavia (Colombian Corporation for Agricultural Research) and the secret departmental lasrías of Agriculture is also important to begin to generate an export fabric that allow to have a greater offer that meets the requirements that are requested abroad.

Likewise, generate phytosanitary agreements between nearby countries, open more agreements with the United States with the aim of minimize costs and that it be the agronomists who visit the packing plants because it is more practical, productive and profitable to supervise them than the almost 30,000 producers that exist in the national territory, as Chagai Stern puts it.

(Also read: «The clothing import tax is a setback»: Fenalco)

A reduced exportable supply also means that Colombia will lose valuable opportunities to receive additional foreign currency at a time when the dollar is over 4,800 pesos. «It would have been the right moment to be able to respond quickly to this international demand that is waiting for many of our products and, if we do not act quickly, we are going to face the restrictions that are coming from the European Union,» said the minister.

In addition, these products represent a great option for diversify the export basket of Colombia, as the government of President Gustavo Petro has proposed at different times in order to reduce the dependence on the foreign currency generated by the extractive industry.

Meanwhile, the executive director of Managro asserted that «The future of Colombia is not in oil but in agriculture due to the demand for food worldwide. Colombia has the moral obligation to be the world’s garden because it has the capacity and potential to be so.»

For this reason, the Government should focus on offering more competitive financing rates to help producers have better harvests, as well as continue showing synergies with large companies so that Colombian products continue to be appetizing for foreign investors.

Although Colombia continues to have a deficit of exportable supply to reach international markets with large volumes, it cannot be ignored that the work that has been carried out up to now between ICA, Invima and the Ministries of Agriculture and Commerce, Industry and Tourism, has made it possible to obtain admissibility for multiple fresh products such as mangoes, which this month First came to the United States after being grown on the Varahonda farm, in the municipality of Palmira, and packed at Frutales Las Lajas in Zarzal, Valle del Cauca.

Also read: Fuels, the group that continues to drive the increase in exports)

The most desirable Colombian fruits in the world

Between January and October of this year the agricultural exports of the country increased 27.8 percent, totaling 9,769 million dollars. Their main destination was the United States and followed by the Netherlands, since most of the maritime cargo enters through the port of Rotterdam and is then sent to other nations of the European Union. Belgium, Germany, Canada, Japan, the United Kingdom, Spain, Ecuador and Italy also appear in the top 10.

Among the most coveted Colombian fruits in the world are the Tahiti lemon, gulupa, cape gooseberry, mango and mangosteens, granadilla, pitahaya, pineapple, tree tomato and blueberries. It is noteworthy that 88 percent of gulupa exports reach the Netherlandswhile Tahiti lemon sales have grown 68.6 percent between January and October of this year if compared to the figures for the same period in 2021. In addition, Colombian pineapple, passion fruit and granadilla are being consumed in countries such as Curaçao, Slovenia and the United Arab Emirates.