Death Pele: this is how the world would react to the death of the king of soccer – International Football – Sports 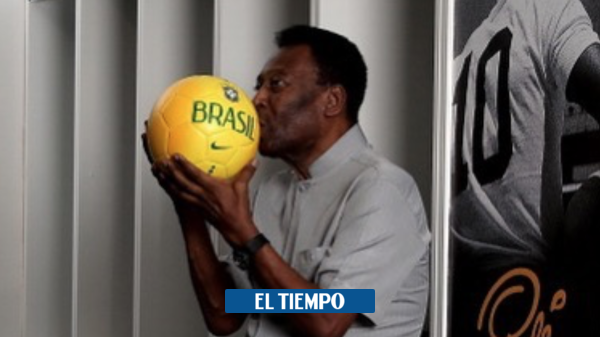 This Thursday, December 29, Edson Arantes do Nascimento, ‘Pelé’, passed by in Sao Paulo, Brazil, a victim of colon cancer, which was detected in September 2021.

Pelé had been hospitalized since Tuesday, November 29, at the Albert Einstein Israelite Hospital, in Brazil, for a medical check-up, but the doctors who treated him pointed out that the chemotherapy had not been effective.

After learning the news, friends, family, soccer players and celebrities from all over the world have expressed their regret and have said their last goodbyes.

«We are deeply saddened to learn that football legend Pelé has passed away. We extend our sincerest condolences to his friends and family,» AC Milan said.

We are deeply saddened to learn that soccer legend Pele has passed away. We extend our sincere condolences to his friends and family.

Ajax published: «Sad day for the world of football.»

(Also: Pelé: the famous phrases that the king of soccer said)

For his part, former footballer Gary Lineker wrote: «He played a game only a select few have come close to. Three times he lifted the most coveted gold trophy in that beautiful yellow jersey. He may have left us, but he will always have immortality.» football».

Pele is dead. The most divine of soccer players and joyful of men. He played a game that only a select few have come close to. He 3 times he lifted the most coveted gold trophy in that beautiful yellow jersey. He may have left us but he will always have football immortality. RIP Pele

A man with a strong legacy that will be remembered ALWAYS. 🕊️❤️

Legends Never Die are always Remembered in the hearts of the People. pic.twitter.com/TDb5tVKVhG

The Brazilian team said: «Pelé was much more than the best sportsman of all time. Our ‘King of Soccer’ was the greatest exponent of a victorious and winning Brazil that was never afraid of difficulties.»

(You may be interested in: Pelé: the greatest, the King, the symbol of soccer (profile))

«The king of football has left us but his legacy will never be forgotten,» wrote Kilian Mbappé.

(Also read: This was the fortune of the ‘King of Soccer’, Pelé)

For his part, Cristiano Ronaldo said: «My deepest condolences to all of Brazil, and in particular to the family of Mr. Edson Arantes do Nascimento. A mere «goodbye» to the eternal King Pelé will never be enough to express the pain that is currently felt Embarks on the whole world of football. An inspiration to so many millions, a reference from yesterday, today, forever. The love he always showed me was reciprocated in every moment we shared, even from a distance. He will never be forgotten and his memory It will live forever in each of the football lovers. Rest in peace King Pelé»

«Before Pelé, ’10’ was just a number. I read that sentence somewhere, at some point in my life. But that sentence, precious, is incomplete. I would say that before Pelé, football was just a sport Pelé changed everything. He turned soccer into art, into entertainment. He gave a voice to the poor, to the blacks and, especially, gave visibility to Brazil. Soccer and Brazil have elevated their status thanks to the King! He’s gone, but his magic said», wrote Neymar.

For his part, Messi wished him to rest in peace.