Dibu Martínez: the photo in which MileyCyrus seems to imitate his gesture – International Football – Sports 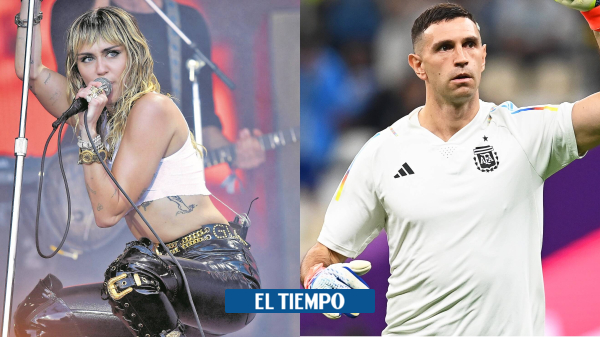 One of the images that marked the world title of the Argentine national team in Qatar 2022 it was the unbridled celebration of the albiceleste goalkeeper, Dibu Martinez, after receiving the Golden Glove as the best goalkeeper in the World Cup.

As soon as he received the trophy, Dibu took it to his crotch and grabbed it with both hands, in a gesture that divided opinions reviewed. While many Argentine fans celebrate his irreverence, many people also described that image as total rudeness.

Why the Dibu made the obscene gesture with the trophy

When asked why he had done that, Martínez explained: «I did it because the French booed me. Pride does not go with me.» However, it was not the first time. He had already had the same gesture when he received the award for the best goalkeeper of the 2021 Copa América in Brazil.

Dibu’s attitude continues to be highly commented on social networks and in recent days an image of another world character characterized by his irreverence has appeared. In it, the singer Miley Cyrus, Dressed very elegantly, she appears carrying a bouquet of flowers between her legs, in the same way that the Argentine goalkeeper did at the World Cup award ceremony.

The photo quickly went viral on social networks and many Internet users took to celebrating this attitude, thinking that the singer was imitating the gesture of the Argentine protero, to the point that some described her as «Dibu Cyrus».

However, it is not true that Cyrus’s attitude was a reaction to what Dibu did in Qatar. In fact, the image is much older.

Miley Cyrus wooed Australian actor Liam Hemsworth on December 23, 2018, in a much-discussed ceremony at the time in which the singer wore a dress designed by the recently deceased Vivienne Westwood.

Among the images that Cyrus published on her social networks that day, the viral photo appears these days, with the bouquet of flowers in her crotch. But also, others in which she takes it to her mouth or puts it on her head. So, apparently, what that photo turned out to be was a premonition…