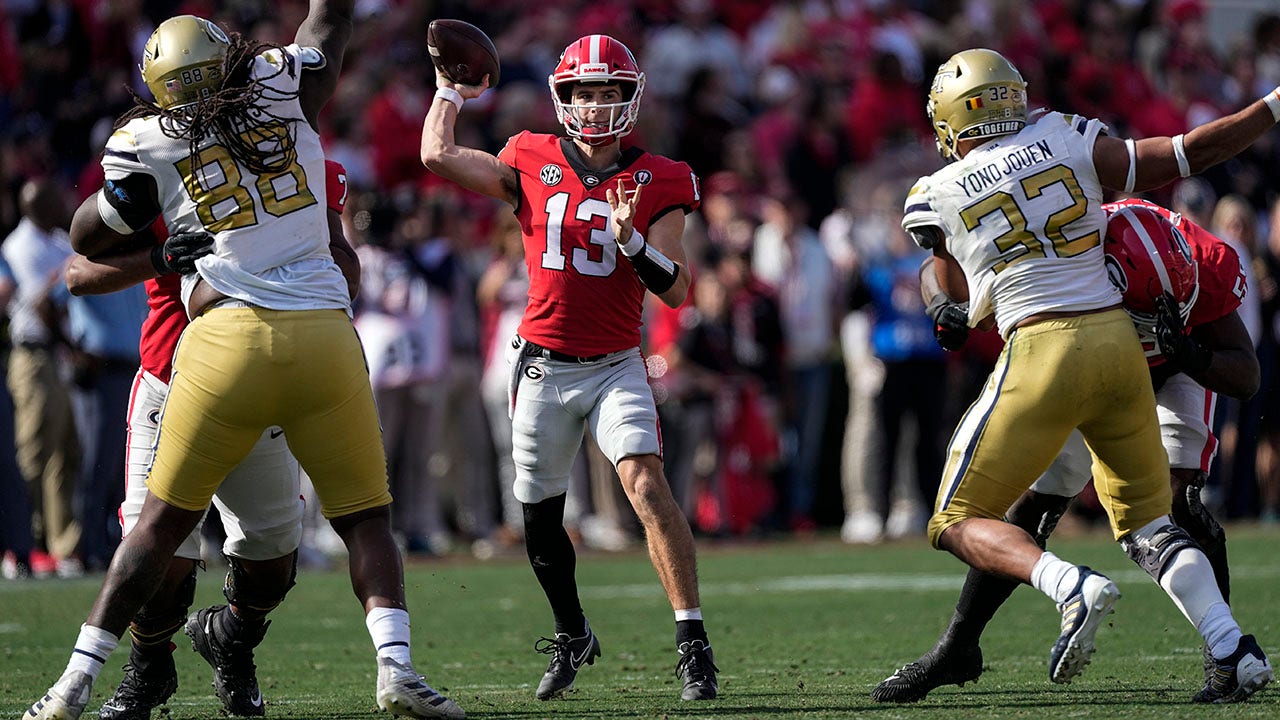 Georgia (12-0, No. 1 CFP) was down 7-0 early and led Georgia Tech just 10-7 at halftime. Then the Bulldogs dominated the Yellow Jackets (5-7) with their running game to score 37 unanswered points and earn a fifth straight win in the state rivalry.

Georgia quarterback Stetson Bennett (13) throws a pass during the first half of an NCAA college football game against Georgia Tech on Saturday, Nov. 26, 2022, in Athens, Georgia.
(AP Photo/John Bazemore)

The Bulldogs, the defending national champions, are in a good position to retain their No. 1 ranking in the college football playoffs going into next week’s Southeastern Conference championship game against No. 6 LSU.

Mistakes in the third quarter hurt the Yellow Jackets’ chance to ruin the Bulldogs’ historic day. Following a low snap, punter David Shanahan was tackled at the Georgia Tech 17. That set up Bennett’s second touchdown pass, a one-yard pass to tight end Brock Bowers on a fourth-down play.

Georgia Tech freshman running back Jamie Felix’s fumble was recovered by Georgia’s Robert Beal on the Yellow Jackets’ next play. The turnover set up a 36-yard field goal by Jack Podlesny to give the Bulldogs a 23-7 lead.

Georgia tight end Brock Bowers (19) fends off Georgia Tech defensive back Zamari Walton (7) as he runs after a catch during the first half of an NCAA college football game Saturday, 26 November 2022 in Athens, Georgia. Bowers was called for a face masking penalty.
(AP Photo/John Bazemore)

The Yellow Jackets ended the Bulldogs’ 37-game point streak with a 24-yard touchdown pass from running back Dontae Smith to Malachi Carter with less than three minutes to go.

Georgia Tech became the first team to score a touchdown in the first quarter against Georgia this season. Zach Gibson completed a 34-yard pass to Nate McCollum on a 4 and 9 play to the Georgia 7.

Georgia Tech running back Dontae Smith (4) is stopped by Georgia linebacker Jamon Dumas-Johnson (10) during the first half of an NCAA college football game on Saturday, November 26, 2022 in Athens, Georgia.
(AP Photo/John Bazemore)

The Bulldogs took a 10-7 lead on Bennett’s five-yard touchdown pass to Marcus Rosemy-Jacksaint in the second quarter. It was Georgia’s only pass of a drive that included a 45-yard run by McIntosh.

Georgia Tech finished 4-4 under interim coach Brent Key and fell just short of its bid to become bowl eligible for the first time since 2018.

Georgia Tech: The Yellow Jackets once again showcased the progress they’ve made under Key. A year ago, the team’s third consecutive three-win season ended with a 45-0 loss to Georgia.

After beating two Top 25 teams, Pittsburgh and North Carolina, on the road with the Key, Georgia Tech was competitive for at least one half against the Bulldogs. Gibson, the Yellow Jackets’ third starting quarterback, showed good poise against the nation’s highest-scoring defense.

Georgia: The Bulldogs have avoided disappointment this season, and if they were flat to start the game, they showed resilience. Bennett avoided mistakes, while McIntosh showed his versatility by posting game-leading totals of 86 rushing yards and 96 receiving yards on two catches. Bennett completed 10 of 18 passes for 140 yards and two touchdowns and carried five times for 21 yards.

IMPLICATIONS OF THE SURVEY

Georgia should protect its No. 1 positions in the AP Top 25 and College Football Playoff rankings.

Georgia Tech: Opens its 2023 season against Louisville on September 2 at Mercedes-Benz Stadium in Atlanta.

Georgia: Play in the SEC championship game for the fifth time in six years when it faces No. 6 LSU next Saturday in Atlanta.