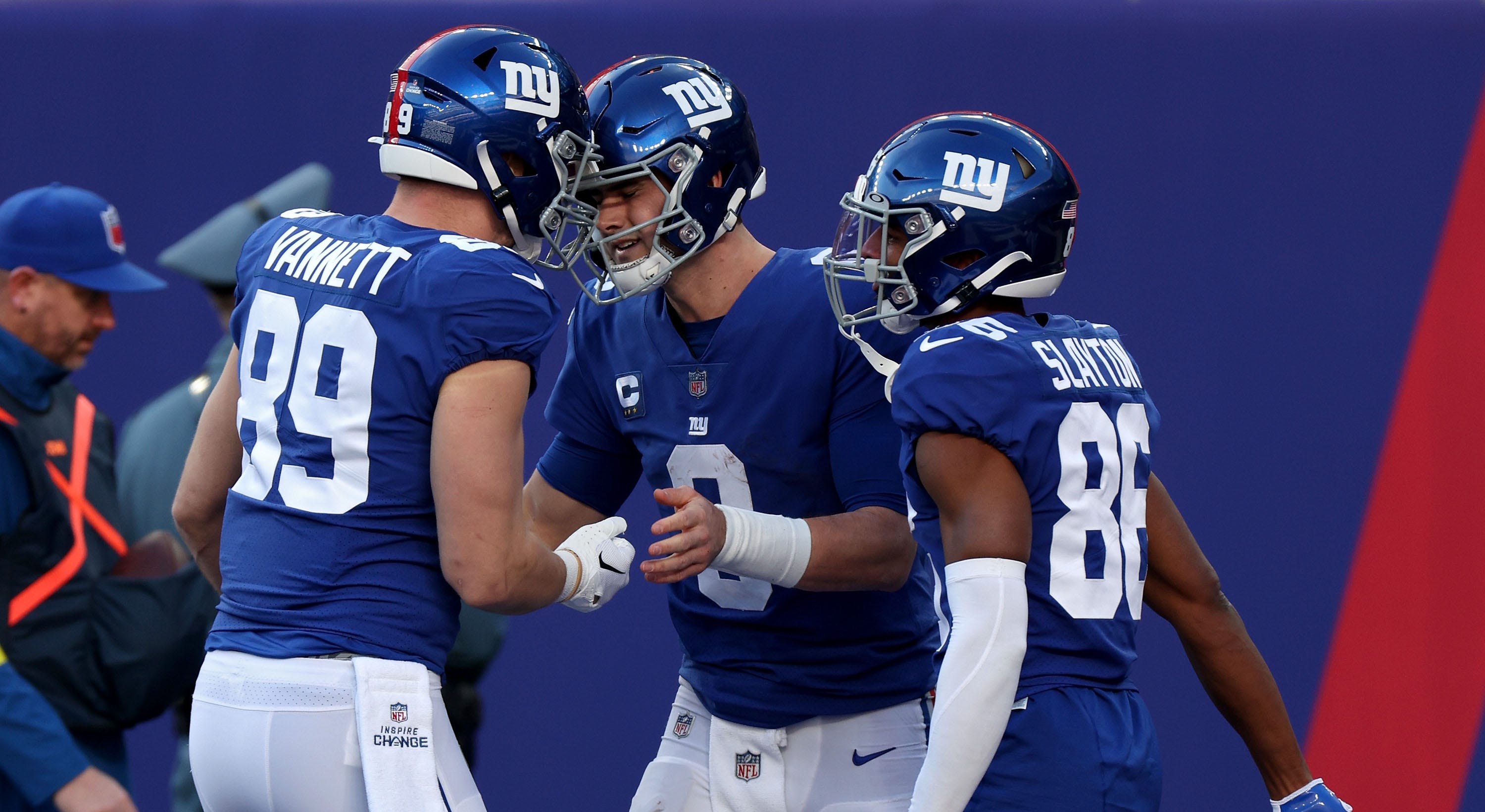 The wait is over for New York Giants fans as their team heads to the playoffs for the first time since the 2016 season after a dominating 38-10 win over the Indianapolis Colts.

In front of a sellout crowd at MetLife Stadium, the Giants knew fate was in their own hands and clearly understood the task, scoring 30-plus points for the first time since Week 5 of the 2020 season.

A lot of that has to do with the play of Giants quarterback Daniel Jones. He not only threw for two touchdowns, but also had two rushing touchdowns in the second half to lead the Giants in one of the best games of his career.

Because they were up 38-10 in the fourth quarter, head coach Brian Daboll removed Jones and other starters from the game, and the crowd erupted with a chant for Jones. He finished with 177 yards and two touchdown passes on 19 of 24 while leading New York in rushing with 91 yards and two scores on 11 carries.

The Giants were methodical as ever on offense, which included an 11-play, 71-yard drive that consumed 6:48 of the clock for their first touchdown of the game. Jones ran to his right and found Richie James for six yards to cap off the drive and take the lead, 7-3.

From there, it was all New York. After a short drive by the Colts, the Giants went back on the attack and Isaiah Hodgins secured Jones’ six-yard touchdown pass to go up 14–3.

Colts quarterback Nick Foles, making his second start in two weeks, didn’t finish the game under center after a Kayvon Thibodeaux sack led to a rib injury. He was in immediate pain after Thibodeaux tackled him and was eventually carried off the field.

Foles finished the game 8 of 13 for 81 yards with no touchdowns and an interception by Landon Collins, who carried the 52-yard home for a pick-six in the second quarter to make it 21-3.

Sam Ehlinger would replace Foles and find Michael Pittman Jr. for a touchdown in the third quarter. But that’s all he could produce on the scoreboard, adding 60 yards on 9 of 14 passes.

Looking further into the stat sheet, Saquon Barkley had a pedestrian game compared to his Pro Bowl-level production, totaling 58 yards on 12 carries. James led the Giants in receptions with 76 yards and his touchdown receptions on seven receptions. Hodgins and tight end Daniel Bellinger also had 42 yards.

While their playoff ticket is locked up, the Giants still have a Week 18 fight against the Philadelphia Eagles on the road next week to complete the regular season. It will be interesting to see how Daboll plays with his guys, as well as the Eagles, with both teams wanting to be as healthy as possible heading into the postseason.

Daniel Jones of the New York Giants is congratulated by teammates after scoring a touchdown against the Indianapolis Colts on January 1, 2023 in East Rutherford, New Jersey.
(Jamie Squire/Getty Images)

As for the Colts, who go to 4-11-1 on the season, they will have one last game against the Houston Texans at home next Sunday.