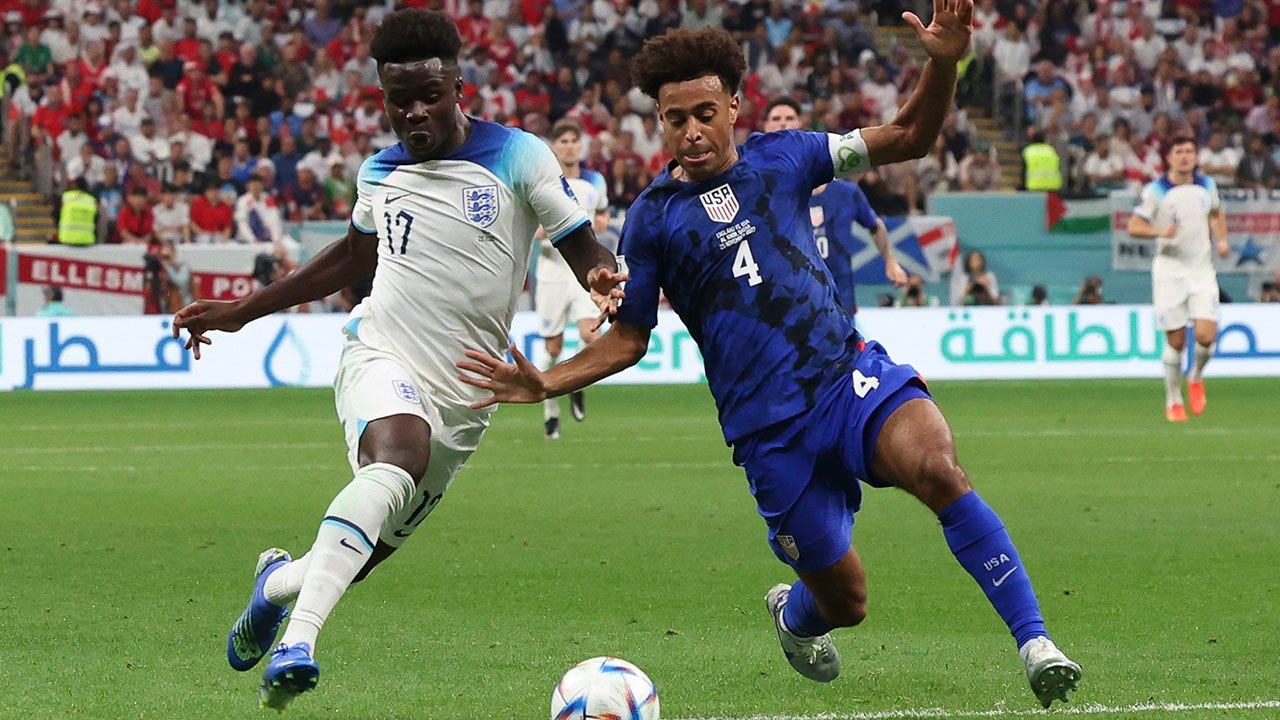 When Iran defeated Wales early on Friday, it opened some doors for the United States to advance to the knockout stage of the 2022 World Cup.

Iran’s victory gave the United States the ability to control its own destiny.

The USA came away with a 0-0 draw against a heavily favored England team on Friday.

A draw was unexpected (+325 in some books), while a US win was over +600 elsewhere, so not exactly a «negative» day for the USMNT. But Tuesday will still be stressful (more on that soon).

Bukayo Saka of England vies with Tyler Adams of the USA during a FIFA World Cup Qatar 2022 Group B match at Al Bayt Stadium on November 25, 2022, in Al Khor, Qatar.
(Ian MacNicol/Getty Images)

In the 10th minute, Walker Zimmerman blocked an England shot that would otherwise have found the back of the net. The British had the first corner of the game, but the US was able to escape that threat and a couple more as England dominated possession early on.

But the Americans hardened soon after.

Weston McKennie had a great look at a beautiful Tim Weah cross in the 26th minute, but his lone shot went high and over the net. Just three minutes later, a shot from Yunus Musah was blocked right in front of him. In the 33rd minute, Christian Pulisic kicked off a shot that went off the crossbar.

The USA also earned two corner kicks in the span of two minutes, and Pulisic had a header in the 43rd minute that went wide. A single shot from an English player went high in the 45th minute, and a minute later, Matt Turner made a great save to keep the game scoreless at half time, his first of the game.

Christian Pulisic of the USA in action during the FIFA World Cup Qatar 2022 Group B match against England at Al Bayt Stadium on November 25, 2022 in Al Khor, Qatar.
(Ian MacNicol/Getty Images)

The USA had five corner kicks in a span of five minutes early in the second half, but couldn’t put anything on the scoreboard. And the Americans were able to avoid any threat England had near the area.

IRAN FOOTBALLER ARRESTED FOR ‘PROPAGANDIZING AGAINST THE GOVERNMENT’

In the 89th minute, the Americans got into the English area but were unable to finish off. In the 91st minute, England took a corner, but Turner cradled a weak header. England also had a free kick in the 93rd minute from the other side of the pitch, but a header went wide of the net. In ’94, the USA had a free kick from deep, but after England pulled it out of bounds, the final whistle was blown.

England held possession for 55% of the game to 45% for the Americans, and the US had 10 shots to England’s eight. However, only one of the Americans’ shots went on target, while England had three shots on target. The USMNT also had seven corners to England’s three.

Americans control their own destiny. A win on Tuesday puts them into the knockout stage.

But a loss or tie will result in elimination and another upset tournament for the US.